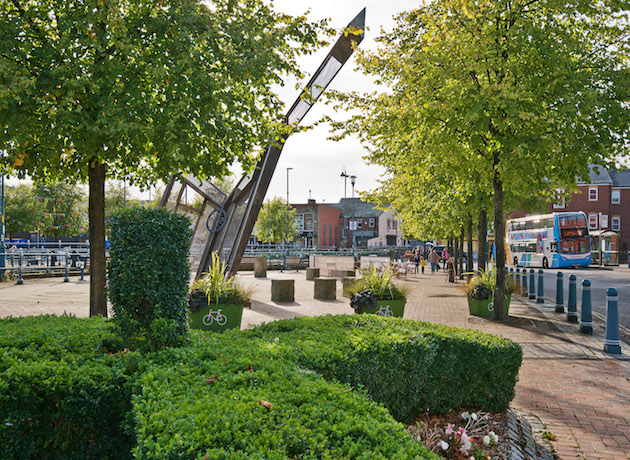 Council officers were given the go ahead at Executive Cabinet recently to work more closely with the GM Station Alliance on transport plans for Ashton and Stalybridge town centre.

In particular, the council can now move ahead and further explore the potential feasibility for improvements to Ashton Rail Station and land surrounding it. In addition plans can now also be further investigated for Stalybridge Bus Station improvements which would aim to join up rail and bus network connections in the town centre, potentially providing more bus stops and services. It also gives the green light for stakeholder engagement in the next phase of the plans.

Town centre regeneration is a key priority for the Council and work to investigate the potential development for transport link and facility improvements and their feasibility is very much linked to £19.7m Levelling Up Fund plans for Ashton town centre and the Mayors Challenge Fund Scheme.

The council will now look to work in partnership with the GM Station Alliance to identify possible improvements and opportunities around planning, maintenance, services and viability as well as to seek and explore external funding options for any identified projects.

For Stalybridge, partnership work with TfGM, Trans Pennine Express and the GM Station Alliance in Stalybridge will now progress to scope out options from the Bus Station Study undertaken on improvements to the bus station, stops and service as well as connections to the rail network. These plans would support the Stalybridge GM Mayor's Town Centre Challenge and will complement the emerging work in relation to the Stalybridge High Street Heritage Action Zone (HSHAZ).

The study carried out by Pell Frischmann (PF) Jefferson Sheard Architects, and Temple Group identified a number of options to improve bus-rail connectivity and general bus services in Stalybridge which need to be explored in more detail before any work can be undertaken.

Councillor Janet Jackson, Tameside Council Executive Member for Planning, Transport and Connectivity "Improved public transport infrastructure in our town centres that provides better connectivity for residents, visitors and businesses will boost the local economy. Investigating and funding these improvements is made easier when we work in partnership with the GM Station Alliance and partners such as TfGM so that we can combine knowledge, resources and plans before moving ahead with any developments. In the current economic climate this joined up approach is more important than ever."

Fusion Aerial installers can provide independent recommendations on all types of digital options whether to upgrade or for a new installation. We want to ensure that you are able to enjoy the best quality available Freeview, DAB Radio, Freesat or any other digital solution. If a digital aerial is not the best solution in your area then we will advise you on the best system to get.

Saving the Best of Brass ‘til last

Counting down to the Cotton Carnival and Gongoozler Fest