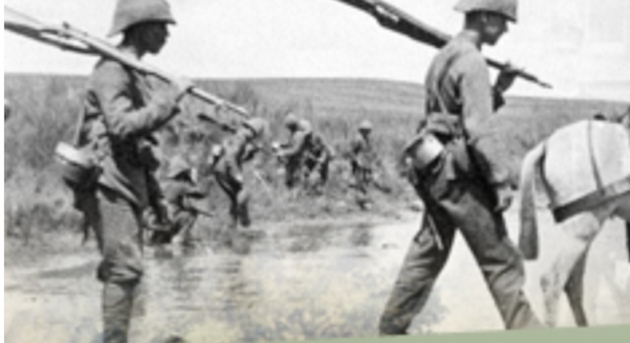 NEW exhibition at Portland Basin Museum, Ashton, offers an opportunity to see key objects from the Manchester Regiment collection, many of which have never previously been on display.

Spanning conflicts such as the Second Boer War (1899-1902), the world wars as well as national service, they include uniforms, medals, souvenirs, drums, trophies and badges, all of which tell personal stories.

Among them are a food tin on which Private Wilkinson engraved images documenting his time as a Japanese prisoner of war, fragments of the regimental colours carried by James Hulton Clutterbuck before he was killed in the Crimea, and the medals of Private Fred Finucane, a First World War boy soldier from Ashton who died of dysentery sailing to Egypt.

Thanks to funding from the Army Museums Ogilby Trust, Tameside Museums has been able to update more than 800 stories behind medals donated to the Manchester Regiment collection. This fascinating resource is available at www.themenbehindthemedals.org.uk

Cllr Sangita Patel, Tameside Council's assistant executive member for culture, heritage and digital inclusivity, said: "The Manchester Regiment had a long and proud association with Tameside, and it is one which has continued through its successors, the Kings and Duke of Lancaster's regiments. All three hold the freedom of Ashton or Tameside.

"This new exhibition at Portland Basin Museum outlines the stories of men who volunteered or were called up to serve their country. While each is unique to the individual soldier, they are all poignant and touching."

"Soldiers' Stories: The Men of the Manchesters", opens on Armistice Day, Friday, November 11, and continues until 2 July, 2023. Portland Basin Museum is open Tuesday to Sunday (10am to 4pm). Admission is free. For more information visit www.intameside.co.uk